I was tucking my 85 year old Mama in and she had her tv on. A Hallmark channel movie had a midwife leaving a pregnant woman’s house while young “Doc Owen,” rode up on her horse. Suddenly a man galloped up and said his wife was in labor and it wasn’t going well. As the doctor turned to go the midwife brought her bag to come along. Reluctantly the doctor accepted the midwife’s help. The father beckoned them into the cabin saying it’d never taken that long before. The baby was stuck but the head wasn’t out.
TV birth is so wierdly funny, the doctor looks down at the woman laying under the bed covers and says, the shoulders are stuck and she pulls out her forceps!! Forceps are for a head stuck in the pelvis, not the shoulders. The head is out when the shoulders are stuck (though there is another discussion here about shoulder alignment slowing the labor before the head is out, too).

I was at the edge of my mom’s bed waiting to see if the doctor’s approach or the midwife’s was going to be presented by the script. Suddenly the midwife is shoving a big pillow under the mother’s hips and says, we’re going to straighten out her hips… 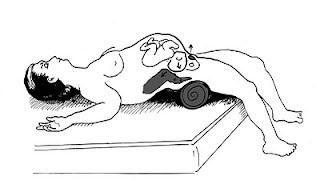 She does, essentially, the Walcher’s technique, also called the trochanter roll, to open the pelvic brim. The OP baby who has a forehead overlapping the pubis now has a cm or more room in the Anterior-Posterior diameter of the pelvis. The roll put under the mother should be firmer than the pillow on tv, and about 12-15″ (half a meter) or the legs can lay off the edge of the bed, hanging into the air. The roll is at the socket of the thigh, not under the sacrum, this is important.
The camera pans the father and older children outside as a baby’s lusty cry fills the forest. Sure enough, Walcher’s has done it again!
This show seems to be called “A Love Saga.” I wrote an article on Walcher’s for Midwifery Today which is waiting to be considered for publication. Here’s one of the illustrations. Its amazing to see this obscure technique presented on tv. I gotta go , another baby is coming on Hallmark!!