Teach the Breech Review of Day 1

The Netherland’s…. for decades the natural birth
hub which, for the world,  equated best practice with Holland. But today Dutch homebirth rates are less than 1 in 5, and the right to breech vaginal birth is threatened to follow the rest of the world’s unthoughtful trend to extinction. 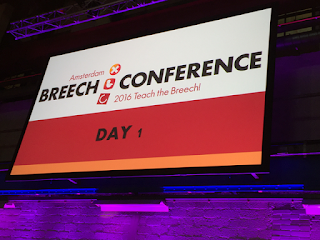 Countries rush to follow the campaign to eliminate vaginal breech birth in favor of surgical birth of the breechling. The US is systematically involuting hand skills for technological dependency and so accepting a rising subsequent maternal death rate just as a politician postpones ecological enforcement and other high tax projects, like bridge replacement.  The US breech BIRTH rate is less than 3%, and the 97% breech cesarean rate is only as high as these fast little birthlings can be detected. These few just surprise us before surgery can begin.

How are US Obstetricians to know normal breech when A.) Breech statistics reflect premature and poorly prepared providers and teams in their outcomes, and B.) The Term Breech Trial was conducted by centers that did not have already successful breech birth clinics. Experienced breech centers would not participate in a random control trial because it is a dangerous proposition for vaginal breech birth (Kotaska).

To hold on to the Dutch quality of service, 50 Obstetricians joined nearly 200 Midwives from The Netherlands and around the world to affirm the value of achieving better breech skills. Even the phrase, “better vaginal breech skills” denotes a purpose subdued for some 45 years  – since the surge in cesarean sections made breech skills a lesson of medical history! 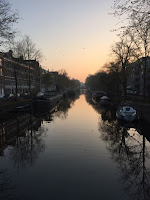 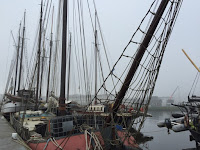 Teach the Breech Conference ignited an Amsterdam harbour warehouse with the contagious enthusiasm of the world’s core breech experts. Their skill and confidence drew in highly skilled providers who understand the need to preserve knowledge about the 3-5% of births in which babies come pelvis first before their heads.
Dr. Joris van der Poste, MD, PhD, Professor of Obstetrics and Gynecology at Academic Medical Centre, Amsterdam; Fedde Scheele, MD, PhD, Gynaecologist of Onze Lieve Vrouwe Gasthuis, Amsterdam; and Ruth Evers, Midwives and Senior Trainer at Talmor, Amsterdam devised the conference and ran it with smooth professionalism. 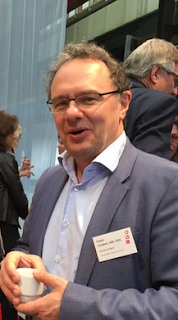 First on the stage was Dr. Frank Louwen, MD PhD, Gynaecologist at Universitatsklinickum, Frankfurt, Germany. There was a warm revelation of his family name being Dutch and pronounced much softer (loo-in, almost like loon) than in Germany (Lo-Ven), both quite different than the American mispronunciation, (Lou-When). He gave a rousing “Origin Story” of how his brain saw again a diagram of a breech delivery process called the Bracht Maneuver from upside down when to talk on the phone he circled his desk and glanced back at the open book from above the drawing. Revelation struck!

In their study, no mothers died and only babies with lethal anomalies. The rate of interventions for hands and knees breech birth was lower than 1 in 5 compared to over 90% for breech birth on a woman’s back.

Labors began when babies were term, frank or complete but not footling, clinical pelvimetry was normal or larger, and the mother desired vaginal breech birth. Labors were stopped and a cesarean was done if the baby didn’t come down, if active labor stopped, or babies vitals were not good.

Upright breech 2nd stage was significantly shorter, with less perineal injury and remarkedly, Apgars less than 4 were only 3.1% compared to 10% with women on their back.

It’s a paradigm shift. America is behind the times. Our question here, Is breech birth with an American Obstetrician or midwife more dangerous than cesarean breech delivery? Until we adapt the training of those obstetricians who conducted the PROMODA study approach to conventional breech birth or perhaps, better, the upright breech birth as in the “Frankfurt School” (not a building, but a method), then we shall not have a happy answer. 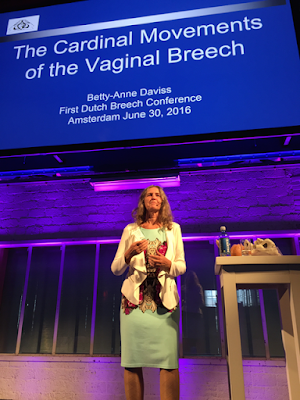 Meanwhile, midwives have been attending breech and cephalic (head down) births in this way for millennia.  Betty-Anne Daviss, RM, MA, Adjunct Professor and Registered Midwife at Carleton University, Ottawa, Canada gave her story of origin in how she learned about all-fours birth solutions from Guatemalan midwives in the 1970s.
Betty-Anne Daviss introduced the “Crowning Touch” single handed flexion of the stuck breech head. The audience was extremely moved by Betty-Anne’s ingenious innovation.
After coffee, three Dutch obstetricians spoke on improving External Cephalic Version and the statistics. I missed any mention of risk, but that may have been because the topic sets me to replaying a horrific phone call following up a US breech mother who told me her baby passed away after a successful ECV – only to be told it was a tragic coincidence. It’s a topic that I approach with caution to the point of cotton in my ears.

Yet, they also told the follow up statistics of what happens when the baby is manually turned. A higher rate of cesarean follows compared to other head down babies.

If you follow me on Spinning Babies, or have taken the workshop, you will know I believe that as many as 80% of breeches are breech for a reason of a misalignment of maternal anatomy “balance.” This number could be lower, but it’s a hefty percent. When we see the highest level of bodywork we see many of the breechings flipping spontaneously. That’s my goal. I do hear from providers that when the mother puts the body balancing routine of the 3 Sisters and professional body work into the week preceding the ECV that either the ECV is no longer necessary or is easier than comparative ECVs. We need study on that, of course, but the anecdotal response is from multiple continents and practices.

Some of these cesareans may have been avoided if vaginal breech birth was supported with skilled providers. But many cesareans are avoided on the other hand. Options for what to do are necessary and needed to meet the needs of families and providers in all their variations.

These highly skilled practitioners were received with high regard for their compassionate and vital work. It’s inspiring to be in the European academic community and see the high level of collaboration. This conference was a glowing example.

After lunch, this middle American middle-aged midwife presented a couple particularly perplexing breech births that became complicated and required on-the-spot innovation of technique. We can learn a formula for breech complication and we must. I highly recommend following the all-fours formula until you have resolved several cases of trapped arms and head. Then you will have in your hands a knowing that allows you to free the stuck breechling in other positions the mother may take.

I don’t believe we as providers should always follow the mother’s choice. This is a provocative statement at first, but just explore for a moment what this can mean. In the water pool, the mother can not respond to the baby’s head sliding past her pubic bone and clitoral ligament (get why she may move suddenly?) there in the same outlet opening way she can do when free movement is available on her living room floor or a firm hospital bed.  So she remains in an inlet closed position when on all-fours in the tub and you must improvise or get her out of the tub, the baby hanging by the atlas. In one video, I showed how I, similar to Betty-Anne, rotated the baby’s head with my finger tips on the temporal bone when the mother remained in the birth tub in such a position that the baby floated out of flexion and lost vitality due to a delay in the birth. I brought the point around to that once you understand the principles and the three levels of the pelvis you can improvise. Then I showed my solution for freeing a small first twin’s arm from the symphysis with an external maneuver which I will present in detail this September. 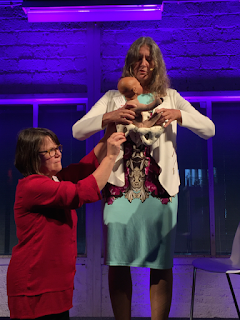 Follow the formula until the inside of the woman’s pelvis and every potential for the stuck breaching is as clear to you as “reaching into your sock drawer at midnight” and you will then be a safer provider when the unexpected happens in less accommodating maternal positions. Meanwhile the esteemed, highly trained professionals seemed a bit shocked and dismayed by the novice in the field. Yet, I showed this for exactly that point, that in North America there is little breech skill and with my small numbers, I am still one of but a handful of the most skilled breech providers in a 500-mile square radius.  I may proceed with duck tape and a prayer, but women have the right and will exercise their rights to vaginal breech birth with or without a skilled provider. One of the reasons is ideology and naiveté, if breech is normal, then why would one need a skilled breech provider? Normal means easy, doesn’t it?
After my own presentation it was lovely to hear Frank Louwen’s admonishment that breech is not dangerous. Know the pathology and solve it as it may appear. Then you have the  level of safety that can restore breech skills to the world. But that talk was on Day 2, so wait for it.
Irene De Graaf, MD, PhD, Obstetrician at Academic Medical Centre, Amsterdam creatively and humbly collaborated with famous Midwife, Rebekka Visser, Midwifery Practice Springtij, Usquert, in the north of Holland. 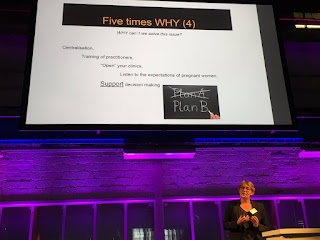 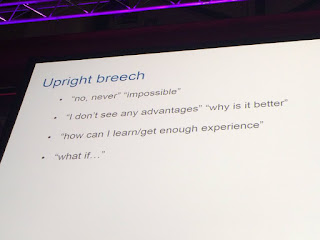 Several Dutch obstetricians spoke with a freshness revealing their personal renewal to considering vaginal breech birth as a potential worth protecting and exploring.

Floorjte Vlemmix, MD, PhD, Resident O & G at Academic Meidcal Cnetre Amsterdam; Lester Befgenhenegouwen MD, PhD Gynaecologist at ZGT Hospitals, Almelo and Hengelo, The Netherlands; and perhaps my favorite presentation was given by Thomas van den Akker, MD, PhD, Resident O&G at University Medical Centre, Leiden, The Netherlands. He spoke of the widespread consequence of high resource countries promoting cesarean breech delivery on the maternal and infant death rates in low resource countries when they are not supported in vaginal breech birth and must switch to cesarean surgery in unfavorable conditions.

One slide revealed the rate of future siblings lost to save the first child. Dr. van den Akker shows that for every 10,000 cesareans done for breech position, 26 babies lives will be saved – but in subsequent pregnancies, 27 babies will die from complications relating back to that first cesarean.
Dr. Thomas worked in Malawi, a low resource country, which copies US obstetric protocol of doing cesareans for all breeches, yet in Malawi’s compromised conditions. Another slide showed how many of their mothers die from cesarean in high and low resource countries. In Malawi, 6 women die per thousand cesareans done for breech.  Remember, these are comparing cesarean to breech birth on the back, which is not as safe for the child as when the mother is on all-fours and the cord is not cut.

Having served an American middle class family who lost a mother to cesarean complications, the reality of his data is poignant in my mind.

Like the promotion of bottle feeding where clean water is not available, promoting surgery where electricity and hygiene, blood replacement and medications are scarce is assigning a death sentence to be like the American Jones, but also because the obstetricians with status can’t even speak to breech skills for the, in this case, Malawi obstetricians for whom they are mentoring.

The horrendous effects of the ego in medicine are life threatening in as much as they innovate. So how to proceed? The process of the ego in accepting all-fours breech birth is diagramed by Irene De Graaft in the slide above: “No, Never! Impossible!”  to “I don’t see any advantages; why is it better?” to “How can I learn/get enough experience?”  to awakening with a question, “What if…?”

An expert panel here moderated by the unflappable Ruth Evers modeled the route to better birth practice for breechlings and their welcoming families and providers. More soon, but now I must get the newsletter out! 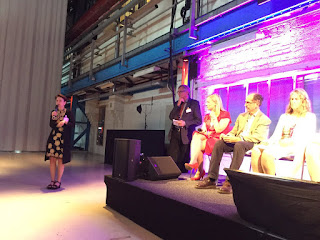 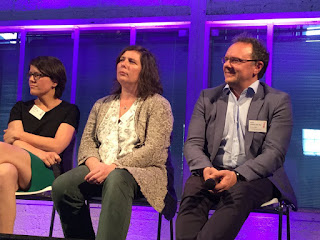