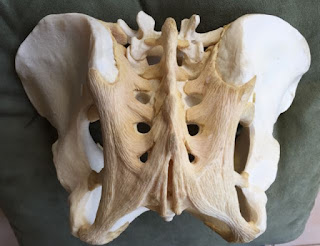 The Sacrotuberous ligament is living tissue that functions to support the pelvis. When flexible the ligament makes way during the fetal ejection reflex when the sacrum shifts outwards making the path of the fetus more roomy for childbirth.

Looking at the back we see the diagonal ligament connect the lower sacrum down to the sitz bones, or ischial tuberosities.

Looking down from the top, we can more easily see the larger sacrotuberous ligament behind the ischiococcygial liagment, also bridging the sciatic notch. 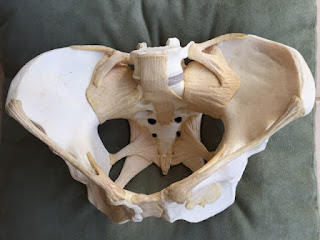 Healthline says this about the ligament: “…largely comprised of collagen fibers and is strong enough to support the sacrum and prevent it against moving from its position under the body weight.
“The connective tissue in this ligament joins with various other tissues, particularly the biceps femoris muscular tendon, which is associated with an important muscle of the hamstrings on the posterior thigh region. It is also a ligament of the sacroiliac joint, which is connected to the sacrum.”
https://www.healthline.com/human-body-maps/sacrotuberous-ligament 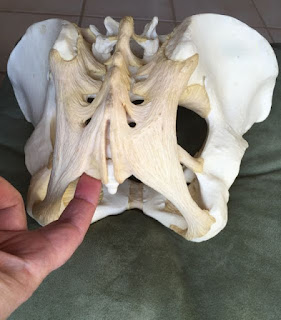 The ligament can become short and tight from a sports injury, trauma, and perhaps chronic sitting.

When that happens the ligament will thicken and shorten and the result is pulling the sacrum, tailbone and sitz bones close and tight.

You know it when the baby engages easily in a good position earlier than usual, like at 8 months, but
the mother’s buttocks look more android from behind. Wide hips, small buttocks with the sitz bones close. The round buttocks are not there, they are replaced by narrow buttocks, but it is not about muscle or fat. In this case, “size” is actually shaped by the placement of the bones. 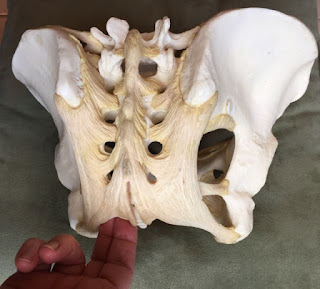 The Sacrotuberous Ligament Release
Body workers understand the benefit to a mild pressure on the ligament for about 2 minutes. You are making a mild stretch, but it is a stretch. The ligament will release and seem to melt away from your fingers.

The pressure isn’t strong, but it is quite firm and determined. Firm is not always full strength, you see? But to reach this ligament you have to use arm strength to get your fingers placed on the inner surface. Lift up and away in your “stretch.” Your angle is distal and superior; up and away from her tailbone angling towards the hip a little, not straight up.

Some practitioner will get their finger on the inner side and then lift and pulse, 2 seconds on and 2 seconds not “on” in the sense of the pull, but not letting go. I’ve given up on that because I lose the ligament.

Consider a Sacrotuberous Ligament Release When:

Alternative: Logan Basic Chiropractic Technique may be quite helpful and can be done in pregnancy.
For chronic return of the ligament back to the shortened length, in other words, if this doesn’t work, add Craniosacral therapy with Myofascial therapy to release the cranials and neck which hold the fascia at the opposite end of the mother.

Stephanie Williams, DC, says, “The sacro-tuberous ligament is super important for maintaining sacral/pelvic balance. I would say most Chiropractors probably don’t think about the ligament outside of pregnancy, but as a pregnancy Chiro I do. It’s really effective for any craniosacral work and is really effective for babies and digestion/colic. Webster trained Chiropractors are trained to check and release the sacrotuberous ligament each time using the Webster Technique.  I usually have the woman/person cough which makes the ligament jump out so its easier to find. It’s also usually tight on the opposite side of sacral subluxation / misalignment. “

The Sacrotuberous Ligament Release done alone may last for a couple hours. Repeating it may make it last longer. So if done in pregnancy, repeat in labor.