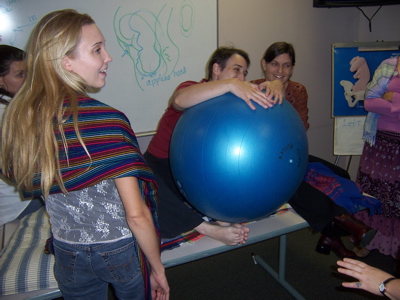 Purpose: Engage the Baby into the pelvis when mother is on an epidural and can’t stand up for the Abdominal Lift and Pelvic Tilt.

Gail was a doula in Minneapolis, long ago before she had the knowledge of Sidelying Release. At one birth, Dr. Diane suggested we help baby move down into the pelvis by draping the determined mother over a ball and having her rock in a wide, and circular motion. The nurse and I stood close by her sides holding her shoulders to keep her from coming off the end of the hospital bed. I would call this extreme circling! It wasn’t super fast, but the circles were large.

See how the workshop participant shows how the mother would place the birth ball between her crossed legs? She’ll lean further forward as the birthing woman is leaning over her pregnant belly, too!

One hip rises off the bed on the opposite side from the furthest arc of the circle (the direction she leans). After 40 minutes, Dr. Diane checked the baby’s progress again. Baby was in the pelvis at last.

Considered the Cadillac of Pain Relief, Epidural use is common in the technological birth care model.  Few women choose natural birth and so few providers know how to support a vaginal birth with an epidural in place. We can offer good solutions to either avoiding the desire for an epidural or to situations in which the labor may be longer due to the epidural.

The side effects of injecting narcotics between the membranes coating the spine, however, may lead to side effects and, thus, more interventions.  A large review by Anim-Somuah found cesarean section due to fetal distress are more common with an epidural than without an epidural.  A common reaction is a sudden lowering of the mother’s blood pressure which may cause a later change in baby’s heart rate. Kristen Kjerulff, MA, PhD, found that epidurals increased cesarean 36% compared to 8% without, and inductions more than doubled a woman’s chance of cesarean. Very few mothers or babies die or are injured by epidurals. An epidural is not without unwanted and unforeseen emergencies.

Few providers, today, know how to support a vaginal birth when labor slows down or the baby’s tipped or sunny-side-up position delays birth. We can offer good solutions to help women have more satisfying birth with and without an epidural.

1.) Myofascial Releases
The relief from myofascial body work before and labor may potentially eliminate the woman’s desire for an epidural since pain relief by natural means may now be sufficient.

Our most popular myofascial (muscle and fascia, or connective tissue) technique is the Sidelying Release.  Another technique, popular around the world is called Shake the Apple Tree. Vibrating the buttocks as done in this technique might be considered a rudimentary myofascial release.

2.)  Static Stretch
Nurses have even told me they do Forward Leaning Inversion (only during and between 3 contractions per  inversion). These innovative care givers help the mom into an “elbows and knees position” facing the foot of the bed and then lower the foot section of the bed so the birthing woman’s head is lower than her knees. Steep inversion may help the cervix dilate easier afterwards. Follow up by resting on the left side and placing the peanut ball between her thighs and calves.

3.) Open the Pelvis Where Baby Waits
Epidurals can add length to the pushing stage of labor. Let’s examine ways to counteract the slowing effect by making more room in the anatomical space of the pelvis.

We don’t just randomly seek techniques to open the pelvis at Spinning Babies. We ask the nurse how high or low the baby’s head is and match a technique from the level of the pelvis that baby waits.
Listen, if you heard a knock at the door, you don’t just open any door. You don’t open the door nearest you expecting the person to enter. You open the door next to the door bell. Otherwise you are only opening the correct door by chance of your location, not the guest’s location.

The same is typical of us birth workers. We’ll use a favorite technique that works a lot of the time, but may not be specific to where the baby is located. We can improve our success by matching the technique to the height of the baby in the pelvis.

Using a peanut ball between the mothers legs allows the legs to be positioned to open either the inlet or the outlet. An internal rotation of the femur will open the outlet. This puts the mother’s knees closer together than her ankles! Sounds contrary to tradition, but this makes the ischial tuberosities further apart.

Rest Smart means, after balancing with myofascial release and static stretch techniques, the mother rests in a gravity friendly position. Place the thighs (femurs) in a position that also helps open the level of the pelvis where more room for the baby is needed.

Conclusion
Epidurals are a mix of narcotics and other drugs injected in between the membranes of the spine. Epidurals can cause fluctuating vital signs which can be dangerous and may lead to an emergency cesarean. Other side effects allow for more time to try non-surgical solutions, such as those listed here. The epidural is the best medical pain relief available today. Natural alternatives may help many women cope satisfactorily without narcotics.