We were about to move, I was 8 months pregnant and I was restless.
In my state of searching for a safe nest the television news report shocked the nation and shocked me to my gestating core.

Three boys were riding their bikes home in a small town in Minnesota when a perpetrating criminal stopped them and asked which one was the oldest. Jacob stepped forward. Even hearing that first telling, I felt his courageous act to protect his friends. They were close enough in age that this question seems an arbitrary sorting, but is the sort of self-appreciating psychosis that a child molester tells himself to make himself believe he’s retained some moral value to  the evil he perpetuates.

My elder son was able to explore the city, the farmlands, even the National Parks with very little supervision in his first 12 years. I wanted him to have the limitless earth, childhood and the kind of personal development through the problem solving of an untethered childhood which Sidney Poitier spoke of in his autobiography, The Measure of a Man.

Six years after Jacob Wetterling was abducted, we moved with our six-year-old son into our permanent home. I remember three days into our new home. He was bored with unpacking and pleaded me to play. I suggested he go out into the big back yard.  The effects on childhood which Danny Heinrich stole from every child in 1989 were evident as my son exclaimed, “By myself!?”

He knew nothing of the expansive fields which my older son and myself had enjoyed. Few children ever will again. 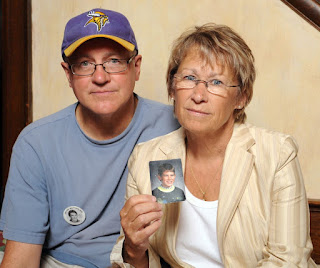 My heart cries with Patty Wetterling and her family. My breath goes out with them and the families of St. Joseph, Minnesota. For their personal loss, and for all we lost when we all lost Jacob.

For 27 years and before, I think often of Mark’s warning (9:42),  to such as these child murderer and rapist, torturer’s and robbers of innocence,

“…it is better for him that a millstone were hanged about his neck, and he were cast into the sea.”

That indeed is an easy ending for such as those who hold our children in captivity without even pulling their van over at all.