Midwife Jewel shares a happy birth story: “Kathryn came to me at 8+6 wks gestation. At the time her fundal height was more like 15-16 weeks. We talked about possibility of twins, dates being off, how she often measured large for dates early in her other pregnancies. She wanted to wait until 20 weeks for an U/S, but I think we both knew something was afoot and she had one at 14 weeks that confirmed twins. 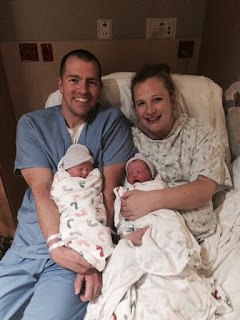 “It seemed like the most important thing was to find someone experienced with supporting a mom with twins and there just wasn’t an option in Casper, WY. Plus, even though Kathryn had had 3 previous straight forward, no issues, VBACs (after a primary c/s for FTP ). [failure to progress, an obstetrical phrase generalizing a lack of progress leading to cesarean.] The local hospital has a VBAC ban and that was going to be an issue too. The most frustrating part I think was that the doctors kept stringing her along, perhaps thinking that she would just give and schedule a c/s. Little did they know of Kathryn’s determination.

“I have a good friend in Boulder, a midwife,” Jewel shares, “and I called to get some referrals and encouraged Kathryn to contact them. We continued to see one another monthly so that I could do Mayan Abdominal massage, review The Three Sisters, keep encouraging her to eat adequately for twins (enough protein etc) and just keep her spirits up. I think all of that played into the awesome outcome she had with her twins. She also did moxa with an acupuncturist several times and that may have helped turn baby A. Kathryn was doing Rebozo Sifting twice a day, and following it with a forward inversion. She was also doing belly massage and have done the sacral and pelvic release. She walked for 15-30 minutes each morning.”

Thank you, Jewel, for all your help and support in this process!! I’m grateful for you in so many ways. Despite the, often time, unsettling circumstances , God really showered his blessings on us and caused us to trust His plan. We are so thankful.”

Gail adds: It’s wonderful to read about breech and twin births
happening in a variety of settings.
Would you like to share a story with me? Email it in a reply here or start a new thread.
I like to include stories that show use of Spinning Babies topics, of course! This month we are sharing a happy outcome when Spinning Babies didn’t work!
Come visit the blog. Spinning Babies Blog. www.spbmembership.wpengine.com