Would you think twice if your hospital’s cesarean rate was higher than the hospital down the street or in the next city?
Check out https://www.cesareanrates.com
How do we know before birth if our hospital cesarean rates even matter to OUR birth?

My friend Adrienne (meet Adrienne Caldwell) told me how she perceived her birth preparations before her first child’s birth and that she know much more about the journey afterwards. I drew this comparison… 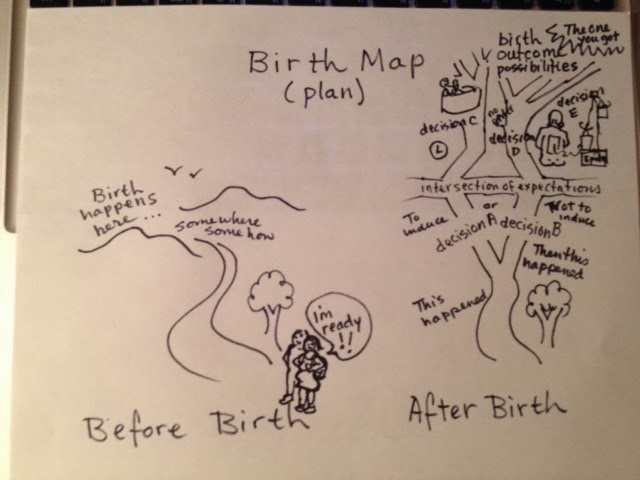 Between Adrienne’s determination, the birth team she chose and really, being in sync with cosmic forces beyond all of us (God’s Birth Plan) she avoided a cesarean. She went to where cesareans were not the only option for her babies‘ births, a rare find in the spectrum of American birth.

Here is an excerpt of Candice’s VBAC (Vaginal Birth After Cesarean) birth story which is posted on the home page of my SpinningBabies.com website.

“I ended up going overdue, at 40 weeks my provider strongly recommended I be induced. He suggested that I induce at 41 weeks due to the estimated size of the baby. Based on what I read regarding induction on your site, and my own negative experience being induced with my first pregnant (that resulted in an emergency c-section), I bargained with him and we compromised on a scheduled induction for 41 weeks 3 days. I continued to do the exercises – inversions, side-lying releases, lots of time on a birthing ball, walking, swimming, and regular visits to an experienced chiropractor. Truthfully I was quite discouraged that I hadn’t gone into labor at 41 weeks and was fearful that I would have to be induced. However, at 41 weeks 1 day, I went into labor on my own… and boy when my baby decided he was ready, he was ready!” – Candice

Candice’s wonderful testimony is from her brave step outside the recommendations from her medical providers. Yet, she continued to work with them in harmony and on her terms.

In case you think I think all VBACs are full of grace here’s one full of spunk at the Off Beat Families blog. Nancy used the ironing board to fill her little breeching to head down, by the way, but that’s not the point of
How to pull off a VBAC like a pro.

“Later, my mother would say that it was the cursing that tipped her off,…”

Just for excitement, here’s another Off Beat VBAC story:

“Garrett called our midwife [from the car] to keep her updated, and she announced a change of plan — she said to meet her directly at the hospital. She asked Garrett if it was me moaning that she was hearing, and he said it was.

“As they were talking, my body gave a tiny involuntary push, and I felt something come up between my legs. My first thought was, “Oh, God, the cord.” But I knew what an emergency that would be, and thought that maybe, just maybe, I had somehow pooped. So I reached down (with much trepidation) and felt…”