Ok, I haven’t been blogging for a while. Two breech labors lately. Were still waiting for footage from the first to be edited and in the second family the poor little breech guy couldn’t line up on the pelvis so thankfully the warm folks at Hudson, WI welcomed the family in for care and ultimately a cesarean. Two other babies were born with compound presentations. Those two probably would have had a cesarean if birthing in a busy hospital. Not for sure, because with the right mix of people women do still have long labors in the hospital. These weren’t THAT long.

Sarah Shannon of our local ICAN (International Cesarean Awareness Network) chapter sent me a link to make my day! This is an excerpt:

…In the U.S., about one in every three births are Cesarean. The procedure is more expensive and can be riskier than a so–called natural delivery. But often, a Cesarean is necessary because the baby is breech, meaning it’s not head down. Many mothers will try anything to get that baby in the right position. So will the staff at a clinic near Tacoma, where they’ve hit on an alternative method that’s delivering remarkable results. KUOW’s Liz Jones has our story.

We stop at Timothy Panzer’s office. He’s a family doctor here. He works with [Kara] McEvoy and the other nurses to provide pre natal care to expectant moms. He says with a breech baby, the stand

ard medical approach is to try something called a cephalic version.

Dr. Panzer: “Which is manually, in the hospital, at the labor and delivery floor, manually trying to turn the baby with the doctor’s hands on the outside of the woman’s belly.”

…That versioning process also comes with some medical risks and a hefty bill. If it doesn’t work, a Cesarean, or C–Section, is typically scheduled.

And if a woman gets a Cesarean once, chances are she’ll need one for subsequent births.

Panzer: “So especially in the case of a first mom, a first delivery, if you can get that breech baby to turn, you’ve done a lot to help that mom.” 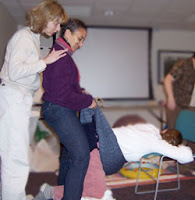 When some of the nurses heard about a gentler way to try to turn the baby, called sifting, McEvoy says they were eager to give it a shot….

The exercise is designed to loosen the woman’s body and re–position the baby.

…. Alma says it’s best to do the sifting a few times a day, along with other exercises to help the baby rotate.

Alma says out of her last nine breech patients, seven have turned. Granted, there’s no scientific study on the effectiveness of sifting. But still, Alma’s success rate so far is pretty good. Especially compared to the more painful versioning technique, which works about half the time on average.

Now, McEvoy is a sifting convert. Although she’s only sent a few breech patients to Alma, she says they’ve all come back with good news.

The photo here is of Gail “sifting” the breech baby of a Baby Expo participant this Spring, and of three students during a Spinning Babies Workshop.