Birth Detective: Why didn’t my OP baby come down? Part 3

This is Part 3, Read Part 1 to start from the Beginning,
Read Part 2.
Jessica processes her birth

“Hi Gail,
“I know I was at 0 station for sure. I will request my birth records as well to make sure. I have joined my local chapter of ICAN and have already found tremendous support! Thank you so much for suggesting this.  They did say he was Left OP. Does that mean he was facing my left side? He was favoring my left side my entire pregnancy it seemed. I felt hands up front down low and kicks up near my ribs on my left side. I also had a dip I my belly that was visible.
“I think where I gave up and lost faith was when the second epidural kicked in and I lost all feeling in my legs. I was numb up to my chest and remember thinking how am I going to feel the urge to push and was disappointed but relieved at the same time for the ease of the pain. It was such a blur at the end I remember thinking how am I going to get through the rest of the stations if I was at zero for so long. I wish someone would have told me I could do it and gave me encouragement. At that point all I wanted was to be done unfortunately.

“I wonder if they can label the reason for my c section as “failure to progress” if they didn’t say it was required or “an emergency” The OB said there was a 5% chance I could push him out after giving me Pitocin (if I wanted it at that point which I didn’t because I was delirious and wanted it to be over). My OB also told me my white cell count was so low they had to call the first response team to be on stand by for me if my numbers didn’t turn around. I wonder why this happened? Maybe because my body was working on overdrive (no food or sleep barely for over 24 hours) etc.”

Gail replies:
Would pitocin have helped, you ask? Was there really just a 5% chance? I think your doctor meant that stronger contractions were not likely what was needed. This usually means that the contractions were seen to be strong enough but baby wasn’t coming down. But he doesn’t want to say 100% because he knows that the unexpected can happen in a good way, too.

Back to Pitocin as a possible solution.
The implied question is, Can increased power of the contraction force baby through the pelvis?
The Spinning Babies look at labor progress is to the diameters of mother and baby and how they are lined up at the time of a labor stall or stop.
Spinning Babies approach to childbirth is to “balance” the passage, so to speak, by releasing what is super tight or lengthening muscles or ligaments that are shortened (tight); Opening the diameters at the level of the pelvis where baby is stuck (in your case “0” station); and a myriad of other factors supported by physiologic means. 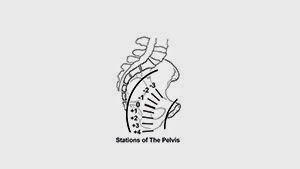 If Simon were OP at 0 Station and your sacrum was tucked in from a short sacrotuberous ligament, then releasing that ligament would be about the main thing, maybe the only thing, to do. Doctors and Midwives are not trained in this. A few doctors are trained to reach in, tuck the chin and turn baby’s head all the way around manually. Some do this with forceps.
Not easy on mom or baby, typically, but can reduce cesareans.
If Simon were OP and you kept going, [you may have] had 4-10 or more hours of pushing on birth stools, standing and hanging from a rope above them, hands and knees and every movement and every effort at full blast [but you] had a fever or low white blood count. That is a deal breaker and cesarean is preferred to preserve mother and child.
Essentially,… you had neither the time (due to the white blood count) nor the personnel to help you with a posterior baby and a sacrum that was pulled into his path.
This is tough stuff to read, Jessica. You didn’t do anything wrong or unusual, you were living your life – we all live in a gravity field meaning we have issues of tension and sometimes torsion in our bodies that we don’t even realize. Once in a while a woman will have just the combination of several issues compromise her birth, such as complications of fever or other signs of infection and an OP baby.
Next Birth Will the next baby be Posterior, too?
Resolving the causes that held this baby OP will help the next baby get to the Left Anterior, that would give you a tremendous boost towards a VBAC. Body balancing and core flexibility rather than core strength are emphasized. A little bit probably won’t help. Go for it!
Now that you are narrowing down the likely causes, you can address them and have a much better time next time. I’ve worked personally with many dozens of VBAC women with a birth history like yours that went on to have a second baby vaginally.
Getting body balance and a strategy to maintain balance and flexibility can be a lot of work, but I know you are up to it.
Come visit the blog. Spinning Babies Blog. www.spbmembership.wpengine.com