This winter has been extremely challenging with my skin. My acupuncturists, Tomas and Katherine Flesher, who run the 3 Treasures Community Acupuncture Clinic at the Ivy Building in Seward neighborhood, took a workshop by Colet Lahoz of The East-West Clinic in White Bear Lake and suggested I try her anti-Candida program. I had a little trouble getting started (I never fit the program!) so I went to see her. Her acupuncture involved about 3X the needles as I was used to in a community acupuncture clinic setting, many being put on my abdomen, face and neck. The drive was long but the results were great. If our insurance covers her, I think I’ll see her monthly or so while I continue to see Katherine and Tomas weekly not just because of their low cost community clinic ($15-40 a visit) but the trust and enjoyment of a long-term relationship.

When I left Minneapolis on March 3rd, I didn’t want to interrupt my weekly acupuncture routine. Tomas strongly suggested I find an acupuncturist when we got to Okinawa, near Japan.
Getting online in Okinawa I googled for an acupuncturist but came up short. No websites listed. Knowing that doulas around the world know their local resources, I googled Okinawa doula and came upon the online newspaper, Okinawa Hai! which featured an article on Mandy’s love of childbirth including some, unfortunately currently non-practicing, local doulas –and another article Ancient Acupuncture Provides Relief. 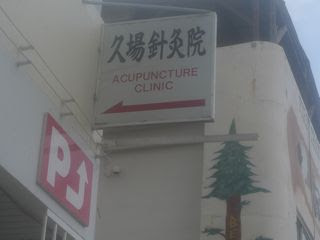 Neither the article nor the comments following the article listed the featured doctor’s name! And embarrassingly, even though I saw this gentle doctor 3 times I never got his name either! His card was entirely in Japanese. But someone in the newspaper comments listed his phone number, 937-3137 in Naha, Okinawa. Here’s the sign (right) on the strip out Gate 2 of Kadena, 2nd block after China Pete’s, left side of the street. And here’s Ryan standing outside the door. You just open the door and step in. 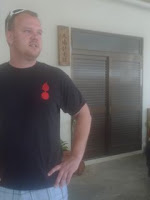 The Ancient Acupuncture article gives very good directions, which led us right there. I called and made an appt the first time, scheduled the next one in person and, last, had a sudden opportunity to go see him without calling. 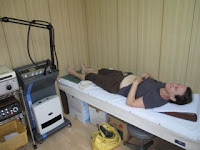 His door was locked and I thought I wouldn’t be able to get in, but a school child perceptively saw my situation and showed me a door bell on the right hand side of the wall.
(Please let me say here that every Okinawan child I saw on the island looked well loved, confident and well-cared for. Everyone of them. And there were a lot of children. They had healthy skin, weights and seemed energetic and lively. The parent interactions were loving and calm. I’m convinced the healthy lives of Okinawa start with excellent nutrition and love. Everyone has a purpose.)
So there I was, showing up unannounced. The doctor was a little surprised to see me but very pleasant. I think he liked that a foreigner was coming often. He spoke little, but spoke English just fine when he did speak. Here I am with his painless needles. He put a couple on my belly. He set a timer for about 20 minutes. Then he took the needles out and came back with a tiny needle on a wooden handle. He poked most of the previous needle spots very quickly with this tinier needle. That was also painless. Thirdly, he came in with a small “crochet hook” implement. I shut my eyes. He finished each appt. by pricking my skin in all the inflamed places with that little hook. It didn’t really hurt but I felt it. I have to say, it was a bit weird. His manner was so eastern, calm, self assured though humble, that I just gave my self over to it. I just imagined he was letting the steam out. And whatever it was, it certainly helped! Each appt. cost 3000 yen, or about 32 US dollars.

Next, we were on to Davis, California to see John and Dianna. Soon it was clear I needed another appointment, “To release heat,” Itay Neta said. He runs the Davis Community Acupuncture Clinic. Itay’s style was western. His community clinic uses the same pricing as 3 T’s. He spent quite a bit of time with me explaining how my skin was like the cover of a heating pot, first a rattle then bouncing over the boiling water and eventually unable to get itself back into balance as my skin became my body’s way to release heat but the heat got stuck. Of course, I’m restating his words, and rather clumsily. His style was much more like I was used to at Three Treasures Community Acupuncture in Minneapolis, personable and informative. I like both approaches.
All of them want to see your tongue, though.