Tina’s  first baby had been in an OP position at the onset of labour which resulted in a long latent labour, total exhaustion, an epidural shortly after arriving in hospital, an abnormal CTG, some foetal scalp blood samples, a prolonged deceleration during pushing and a ‘trial of instrumental birth’ [forceps or vacuum tried in attempt to avoid a cesarean] in theatre [operating room].

This resulted in a forceps birth after which Tina felt that her alignment was different. Her Cranio-Sacral therapist told her that she was restricted in her right hip.

During Tina’s second pregnancy she did yoga and attended acupuncture appointments. Unfortunately, her Cranio-Sacral Therapist does not work on pregnant women.

Tina had a spontaneous labour that was slow to progress in hospital. Her second stage was two hours long with no progress at all. She remembers trying a lot of different positions with her midwife but felt she was making no progress and this was confirmed by her midwife on vaginal examination.

Tina’s second baby was in an OP position again and born by Forceps birth. After this birth Tina felt incredibly sore for some time to the point where it was hard to sit and a broken coccyx was suspected as the cause of the pain. One evening about two weeks after the birth Tina sat down on a chair and heard a crack, this is when the coccyx broke completely. She says that it took a year to be pain free.

[During Tina’s t]hird pregnancy, my wonderful colleague Helen asked me to visit Tina at home because of the history of two OP babies resulting in instrumental births. Helen knew that I had gone far to attend a Spinning Babies workshop in Houston, Texas and knew that Tina would needed to try something different this time.

Tina was around twenty four weeks pregnant when I met with her. I explained to Tina that she needed to create space for her baby by balancing her soft pelvic and uterine tissues. I showed her the Three Sisters [of Balance] and advised her to do the Daily Essentials. She managed to do this about three times per week.

I also advised her to see my chiropractor Nick who works with pregnant women a lot. Nick also commented on the restriction in Tina’s right hip. She attended for eight or nine sessions.

I had contacted Gail to talk about Tina’s case and Gail suggested that Tina did some release work around her [perineum due to localized pain], finding areas that felt congested and tender and applying [light, sustained] pressure in those areas [in a clockwise fashion from “2 o’clock to 10 o’clock to relieve chronic vulvar pain]. Tina managed to do this a few times per week, feeling that it started to be less tender as time went on.

Tina went into labour spontaneously. She had a start and stop labour again and did the Three Sisters of Balance on several occasions. She phoned me after a night of early labour, totally exhausted. She had been doing balance work and yoga. I said to her that perhaps everything was as it should be, but she was trying very hard to ‘work it’.

I felt at this point a sleep would be best if she could manage it. She was feeling crampy and I suggested a warm bath and then bed. She fell asleep and woke up in established labour.

We decided to meet at the hospital at around 6pm.

The baby, at this point, still was on Tina’s right lateral and we decided to be proactive and use the Three Sisters to create balance and space in Tina’s pelvis. Tina alternated between periods of rest lying on her side with the leg over the peanut ball (alternate sides) and being up on her feet. Labour seemed to progress slowly and we knew that we needed to get baby to rotate some more.

On palpation, baby seemed to be located in the mid-pelvis which was confirmed by vaginal examination.

[This might be why the Three Sisters didn’t have a more immediate contribution to labor progress. This finding, plus the solutions that worked, hint that baby was in a deep transverse arrest which means the baby is actually stuck on the ischial spines, two bony points half way through the pelvis. If baby comes on these points with the head still facing a side they can get stuck there. The following solution is often success for transverse arrest.]

Tina did lunges and each side and then we did shaking the apple tree. This did the trick and baby’s back now palpated on the front of Tina’s abdomen.

Because of Tina’s previous history of a broken coccyx and after talking with Gail about possible ideas for Tina’s labour, I decided to do a sacro-tuberous ligament release by locating the sacro-tuberous ligament on Tina’s buttocks and applying acupressure type massage to them in order to release them and allow the sacrum to move and make room. We did this prior to entering the pool. 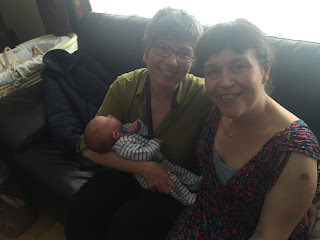 Tina’s third baby boy, Oscar, was born in the pool after about 15 minutes of pushing.

Here are Tina, Oscar and me was taken when he was around two-weeks-old and ready to be discharged from midwifery care. He is ten-weeks-old now and enjoys his mama’s milk and plenty of cuddles from his older brothers and mum and dad. His mum is feeling fabulous and has had absolutely no problem with her coccyx or misalignment after this birth.

Tina still does the Daily Essentials yoga routine when she manages to fit it into her busy life as a mum of three little boys.